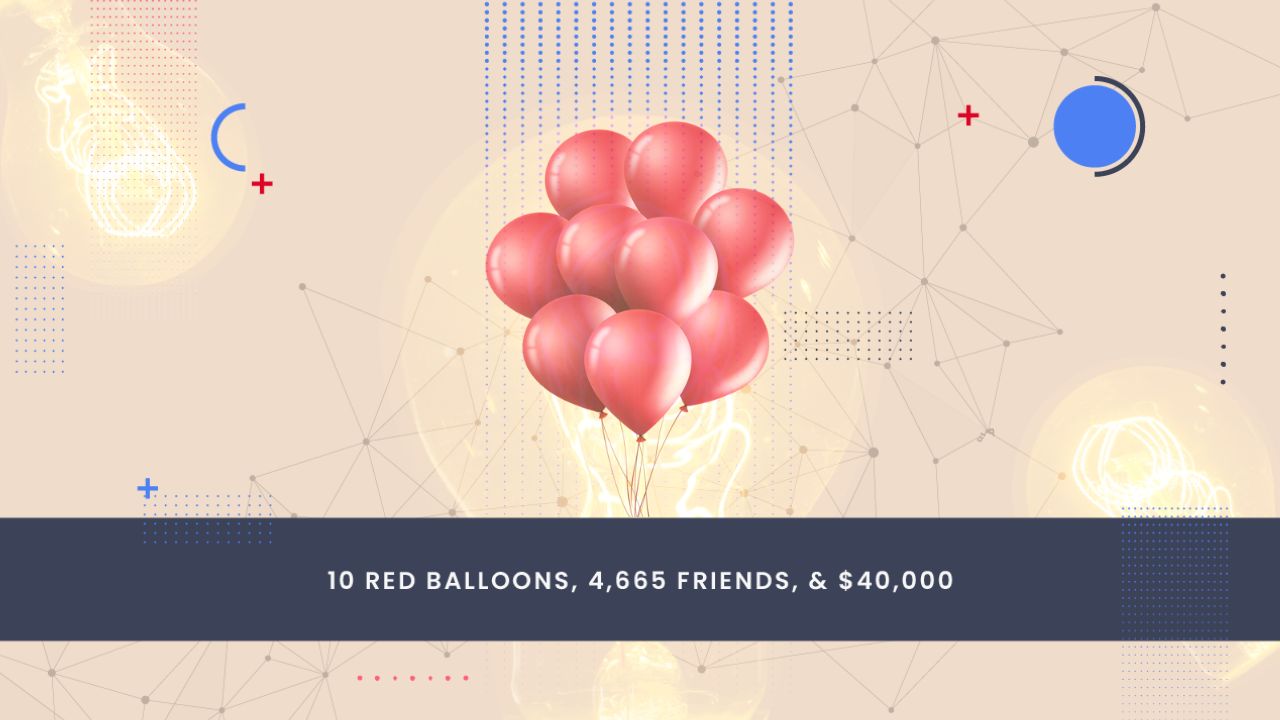 How would you go about finding ten large red balloons deployed at secret locations throughout the United States?

The U.S. Dept of Defense came up with this question ten years ago. It was created as a way to simulate and be able to protect against all kinds of security risks like cyber threats or terrorist attacks.

The mission was to create a strategy they could employ to quickly identify several, unknown locations in the U.S. that were under this kind of threat. Hence, 10 giant red balloons scattered over 3.8 million square miles.

So, they held a contest to see who could solve what they called, “The Red Balloon Challenge” in the shortest amount of time. The prize was $40,000.

The winning strategy was pretty shocking and required a lot less math than one would think.

The team that won was a group of MIT grad students. They found all 10 balloons in just under 9 hours without a single algorithm or logical strategy.

Here’s what they did:

Essentially their strategy was, “if you find this, please help!”

They invited other people into the problem and shared the risk as well as the reward.

What this taught researchers about human behavior is that the same success happens when, instead of expecting to find a place for our vulnerability with a person or group once trust is established, we go first with vulnerability.

Daniel Coyle, author of The Culture Code, is the person I first learned this from a few years ago. He says that teams with great cultures have three things:

But vulnerability has to precede trust. In the book he says this about vulnerability: “Leaping into the unknown, when done alongside others, causes the solid ground of trust to materialize beneath our feet.”

You might believe that if you give it all up, you may end up with nothing.

Of course, there is a risk in going first.

Of course, the person or people on the other side of the table can fail to complete the loop.

But, they’d be working against human nature to do so.

Often what’s noted when this is studied is that the more vulnerability that’s presented, the greater the receptiveness and cooperation from the people on the other end.

What keeps you from asking for help?

Where do you see opportunities to lead with more vulnerability within your team?

What risk would you be willing to accept to deepen the trust and create the loop?

Read more about The Red Balloon Challenge and the Trust-Vulnerability Loop here.

As you know, a TON of challenges exist in leadership. Whether you're looking for solutions, or just want reminders, join The 261 newsletter for thoughts, actions, and tips on how to lead and manage well – 261 business days a year.

We hate SPAM. We will never sell your information, for any reason.